This tutorial outlines how to make the leather gloves and teal colored arm bracers for a Cara Dune costume.

The faux leather gloves I purchased from Amazon for $13. I chose these because they have 3 seams that run from the fingers to the wrist — a detail from the Cara Dune display I wanted to match.

Step 2
There will be excess plastic around the edges on the knuckle guards that need to be removed. See the image below that indicates what areas should be removed. This is hard plastic so regular Exacto knives won’t do the trick. I used a knock off Dremel to get the job done. Make sure to wear eye protection and a mask because the Dremel tool will send plastic flying and we don’t wanna breathe that shit in!

Once you’re done sanding off the excess, your large knuckle pieces should like the image below. The smaller finger guards don’t need any alteration.

Step 3
We’ll need to add a few holes to the large knuckle pieces so we can attach them to our faux leather gloves. I drilled 3 small holes. Two on one side and one on the other side. See the images for placement.

NOTE: Looking back on Step 3, I think drilling two holes on both sides would make for a more secure attachment to the faux leather gloves.

Step 4
Now it’s time to paint the knuckle and finger guards a black and teal-ish color. I used a brushed metal FolkArt acrylic paint in ‘Brushed Black’ and a color shift FolkArt paint in ‘Aqua Flash’.

Start with a black base on the large knuckle guard and finger guards. I mixed a bit of aqua into the black for a charcoal color.

Now, let’s add the teal detail to the large knuckle guard. I mixed a minute amount of black with the aqua. I swirled it around but did not completely mix it in. Just give it a marbled effect. Then I used a fan brush to add the teal color, concentrating it on the long sides and using less towards the top.

Step 5
Time to prepare the faux leather gloves! I removed the lining, but this is optional. It gave me more mobility and kept my hands cooler. To do this, simply pull the lining out towards the wrist. The lining will be slightly stuck to the faux leather, but a very light tug will get it “unstuck.” Gently pull this all the way out of the glove.

Now, cut along the wrist to sever the lining from the glove. You could add some serging or zig-zag stitches to the raw lining edge, but I opted not to. I don’t feel this raw edge will be an issue.

Step 6
Put on the gloves and mark the knuckles on your fingers and top of your hand.

Now, you have a completed pair of Cara Dune gloves! 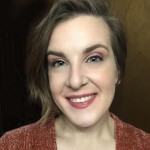 Erin at the Mega Coven
Erin has been a graphic designer by day and a seamstress by night for over a decade. At Mega Coven Art she combines her skills to give you useful sewing tips, costuming tutorials, and pattern drafting advice. And sometimes fancy tidbits from the Supernatural universe.

Get the materials I used!

These are all the supplies mentioned in this Cara Dune gloves and arm bracer tutorial.